Whatever navigational senses people were meant to be born with, I happen to be lacking; I can get lost in a Walmart parking lot. But in this case, I got pretty interested in the satellite photographs and maps looking at the area around the mesa burial ground even though looking at maps is generally something I hate.

Years ago, an Albuquerque native named Droogie posted on a site called Something Awful Forums. He did a really great series of write-ups on the West Mesa, and he posted pictures where tire tracks can be seen leading to the area where the women and girls’ bodies were later found. Only two pictures below waere created by Droogie, but he deserves credit for the my dive into the geological part of this case. Thank you, Droogie!

At the end of this post, I have also included a short clip I created to show the area where the tire tracks were, as well as the development over time. It’s a bit easier to see than in the pictures, I think, and includes some shots I couldn’t get in pictures.

The majority of the photos posted below were retrieved from Albuquerque’s historical aerial viewer. 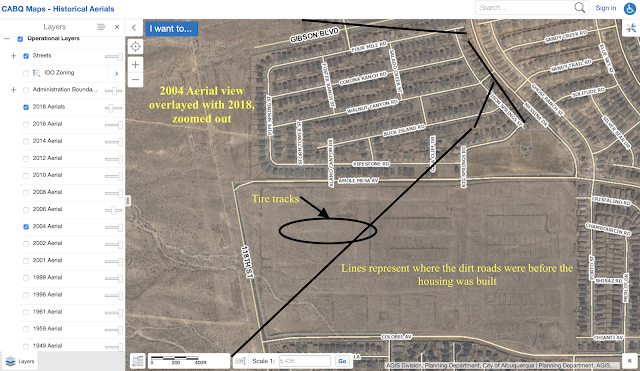 By 2006, you can see the housing development coming up. I had previously thought that it was still pretty empty in 2006, but it looks like there had been a lot of construction activity, and that may have scared the killer off. 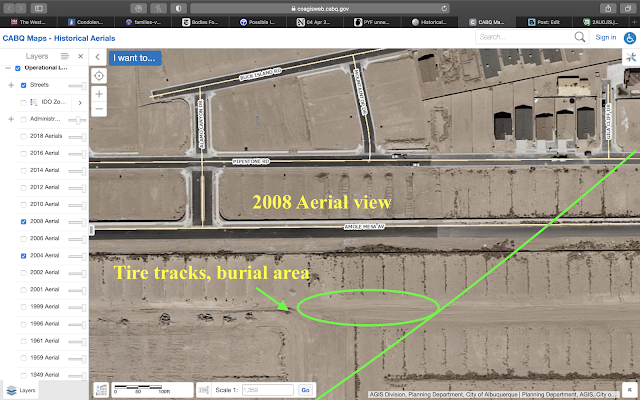 By 2008, the housing crash was in full swing and development on the mesa had largely ceased, though you can see a new neighborhood just streets away.

Here is the link in case the clip above isn’t working.

Thank you for reading and following along.

If you have information on the West Mesa Murders, please call:

Crime Stoppers at (505) 843-STOP with any information you may have concerning this crime.

You may also email information to Detective Denice Myers at dmyers@cabq.gov or Investigator Ida Lopez at ilopez@cabq.gov.