Tara Calico’s disappearance is a popular subject in the true crime community, but few have heard of Debra Lansdell, who disappeared from the same small New Mexico town. While Tara had disappeared from Belen on September 20th, 1988, Debbie disappeared on September 21st, 1985. There will also be several names you’ll likely recognize if you’re familiar with Tara’s case. Unfortunately, there’s not a lot of information out there about Debbie or her case and her name is frequently misspelled as being Landsdell instead of Lansdell.

Like Tara, Debbie grew up in rural New Mexico. Her family lived in Peralta, which north of Belen but south of Albuquerque, a small farming community. She had survived spleen cancer as a teenager and this lead to her career as a nurse. Debbie graduated from Albuquerque’s TVI in August of 1975 with a practical nursing diploma.

In 1985, Debbie was freshly divorced and starting anew. She got a small apartment in Belen on Jarales Road, and started a job at Lovelace Urgent Care in Albuquerque, on Isleta Boulevard. She bought a used Porsche 924, and she even had a new boyfriend, who also lived in Belen. She was enjoying her newfound freedom. Her family described her as a bubbly individual who was serious about her career, and while she was fun, she was not flighty.

Debbie left her boyfriend’s apartment at 2 am on September 21st, 1985, and headed home. This is the last time anyone would see her. Two days later, when Debbie didn’t show for work, she was reported missing. Upon going to her apartment, detectives found that her rust-colored 1978 Porsche was missing, her apartment door was ajar, but there were no signs of foul play. The Valencia County Sheriff’s Department (Debbie’s apartment was outside of the city limits) told her mother that most women leave of their own accord- and while this is true, it wasn’t something that struck them as true for Debbie.

Despite the fact that Debbie was young, blonde, attractive and generally the kind of story the media loves, there was very little attention given to her case in the beginning. The first mention I could find about her disappearance was in January 1986, four months after she went missing, and it was as a footnote to another case: the disappearance of Linda Lee Daniels, a co-ed who disappeared from her driveway in Albuquerque, leaving behind her groceries. Linda was later found to have been murdered by a group of 4 men. 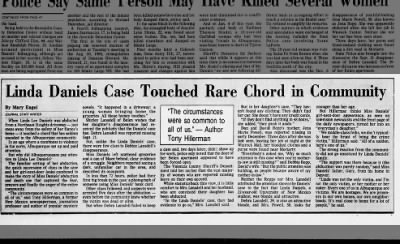 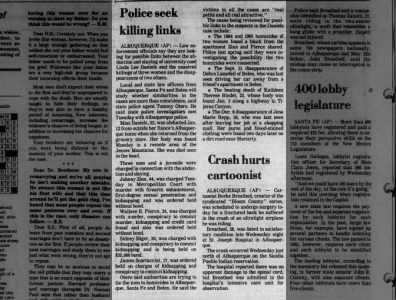 When Linda Lee Daniels disappeared, suddenly the missing and murdered women of Albuquerque’s surrounding areas were thrust into the spotlight, and one of them was Debbie. Though she had been missing already for 4 months, there had been no mention of her in the surrounding area’s newspapers, or, it appears, much or any work done on her case. However, with the new attention given to her case, by February 1986, Debbie’s Porsche was found at an apartment building at 1520 Gold SE in Albuquerque. A tip told investigators that it had been there for several months. Though some dents and scratches were on the Porsche that had not been there when Debbie was driving it, the car had no obvious signs of foul play, and did not match the prints from the killers in the Linda Lee Daniels case. 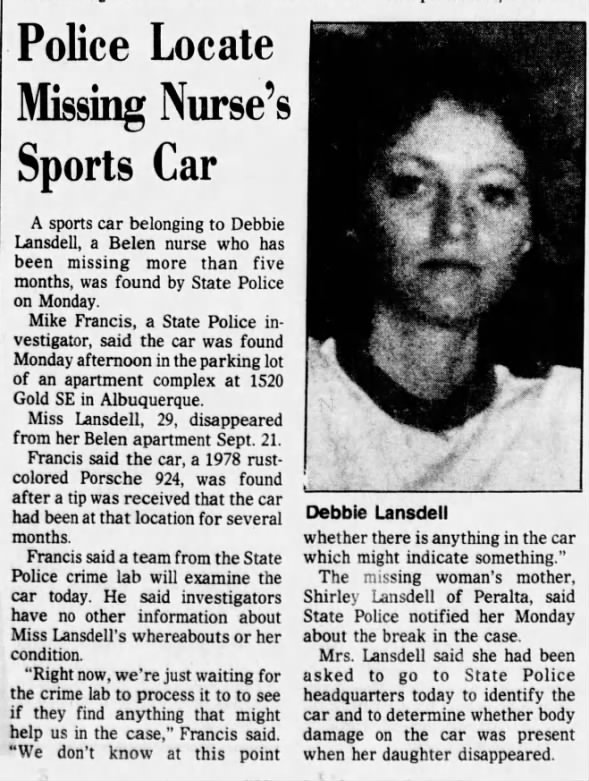 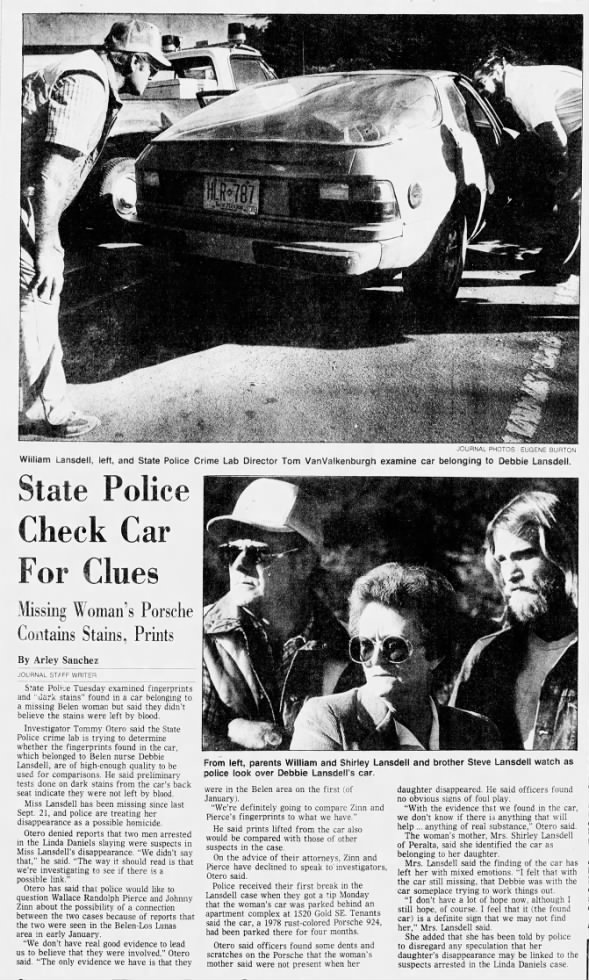 For a long while, Debbie’s case went dormant again. Then, in January of 1987, remains were found in Belen behind the Elk Lodge, and instantly, the media speculated that they may belong to Debbie. However, they turned out to be ancient Native American remains, and the case was cold once again. 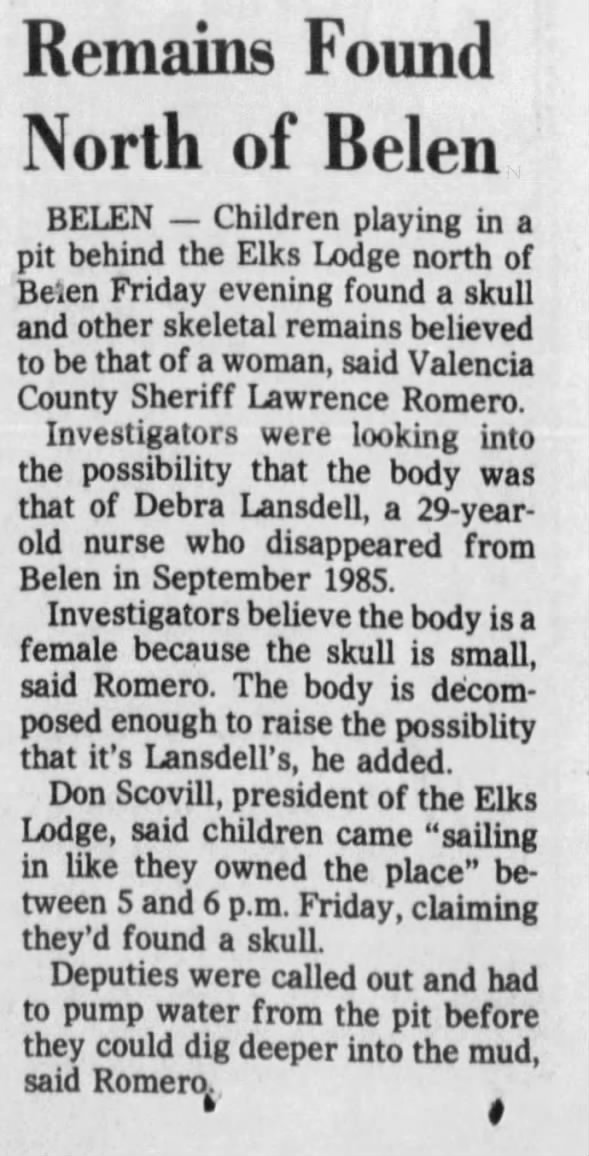 In August of 1988, Valencia County Sheriff Lawrence Romero stated that the sheriff’s office was reopening Debbie’s case and were going to “take a hard look at some new leads,” and that he was confident that a break would come in the case and that it would be solved. Romero said that the Sheriff’s Office was gathering “every file on the case from the various law enforcement agencies involved in the investigation.” The investigation into Debbie’s disappearance had been turned over to the state police in 1986. Upon hearing that the case was being “reopened,” State Police Sgt. Herman Silva said that the case had never been closed or cold, and that he was unaware of any new information.

Then, just one month after the reopening of Debbie’s case, Tara Calico went missing from Belen while riding her mother’s pink Huffy bicycle along Highway 6 (now Highway 47) out towards Kennedy Campground. It was eerie that both women went missing from Belen, a small community of less than 7,000 people, but even more strange that they both disappeared in September, and just one day off from each other; Tara disappeared on September 20th, 1988, and Debbie disappeared on September 21st, 1985. Sheriff Lawrence Romero was also involved in the investigation of Tara’s disappearance. However, the disappearance of the two women were likely not related, but in a strange twist, the best-yet resolution to the Tara Calico case speculates that Sheriff Romero’s son, Lawrence Romero Jr, was involved in Tara’s death– whether known or unbeknownst to his father. 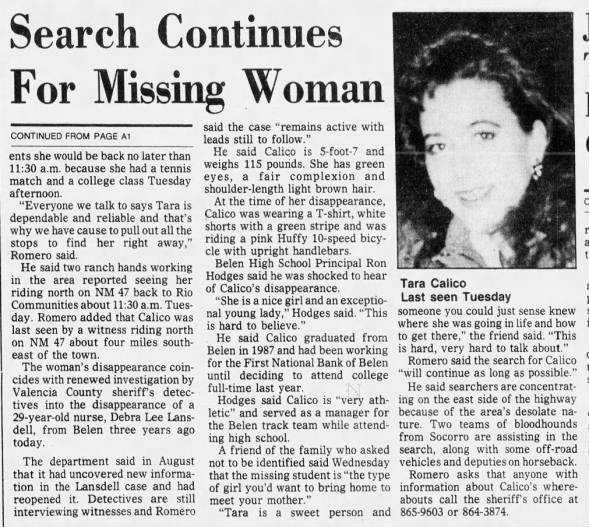 In December 1988, skeletal remains were found on the Sandia Crest by bow hunters, and Valencia County detectives sought to compare it with Debra Lansdell’s dental records since both were missing their wisdom teeth, as well as the times of potential death. The office of the medical investigator stated that the remains were most likely from a woman in her early 30’s, and she had been deceased between 2 and 4 years. Ultimately, Debbie’s dental records did not match those of the woman. Lansdell’s family had mixed emotions; although they wanted to believe their daughter was alive, they also wanted to know where she was and what had happened to her. “We can cling to hope as long as we can,” said Shirley. Other remains, found in Tijeras Canyon, also did not belong to Lansdell. 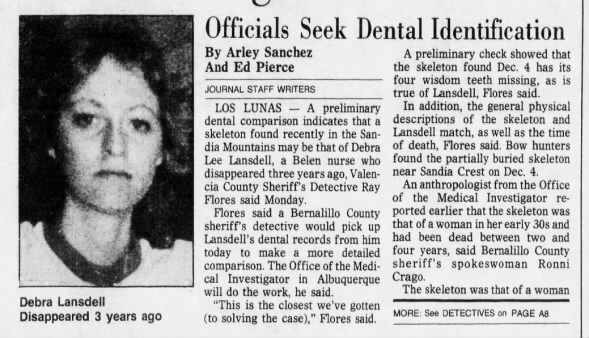 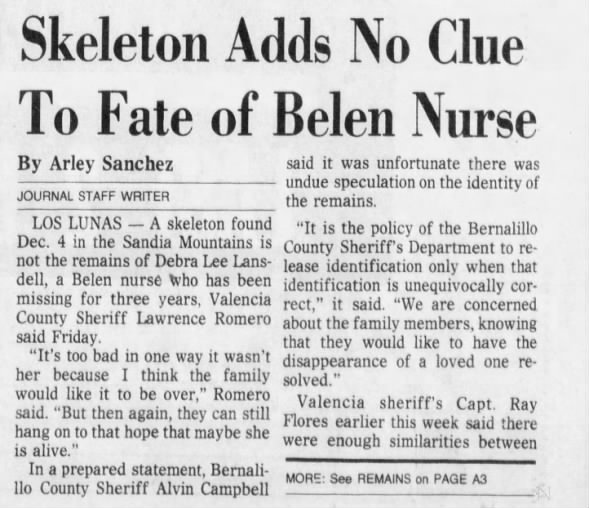 Another commonality between Tara and Debbie’s disappearances is that their families, along with other families, launched the Santa Fe Alliance of Victims of Unsolved Crimes campaign for victim’s rights in New Mexico. Their mothers, Shirley Lansdell and Pat Doel, spoke to the Albuquerque Journal on how they felt their daughters’ cases had not been appropriately handled. The group sought to create an amendment to the constitution which would allow victims or their families the right to be present and be heard at every turn of the investigation, as well as the right to be updated on their case. Some of the other families involved were Levi Esquibel and Charles and Brownie Mulvaney. Danielle Esquibel had been killed in a hit and run accident in Santa Fe in 1986, and Teri Lynn Mulvaney had been murdered and sexually assaulted in her Santa Fe apartment in 1984. I wasn’t able to find if further amendments had been passed- that’s another rabbit hole to go down, as well as the multiple murders I found out about while reading this article.

In July of 1991, another human skull was found, this time in Valencia County, off of the Manzano Expressway. The skull did not match Tara, and investigators wondered if it would match Debbie Lansdell. The skull had two holes, later found to possibly be made by a bullet from a .22, and though there were no additional bones found in the surrounding half mile, there was some “unspecified evidence,” found. The skull had been there for between 1 year and a half up to 4 years, and the skull was partially buried. It was likely from a young girl or a delicate young boy, about 13 to 14 years old. I was not able to find the skull was ever to match anyone, or any further articles about the skull. Surprisingly, I found a slew of references to other remains. More rabbit holes! However, it appears it was officially or unofficially found to not be a match to Debbie. 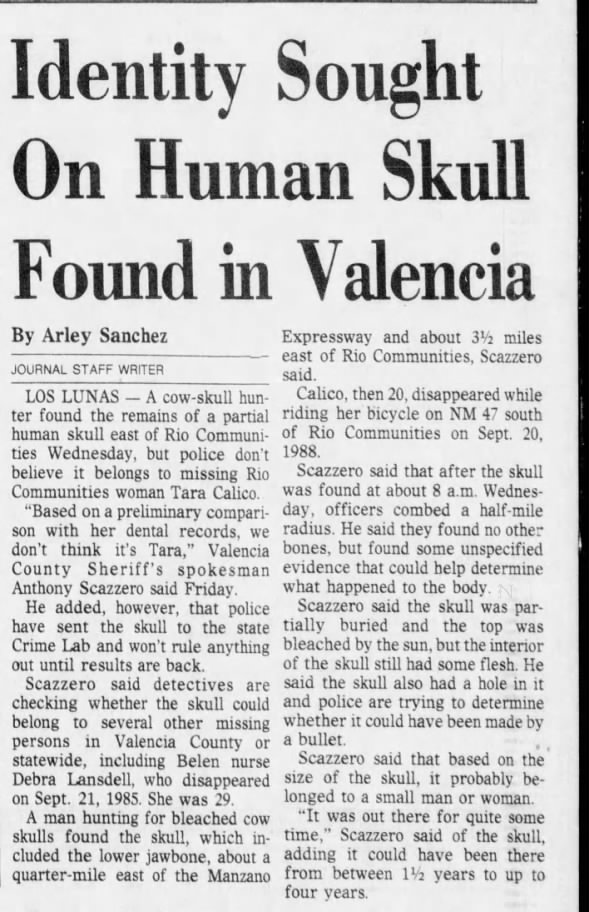 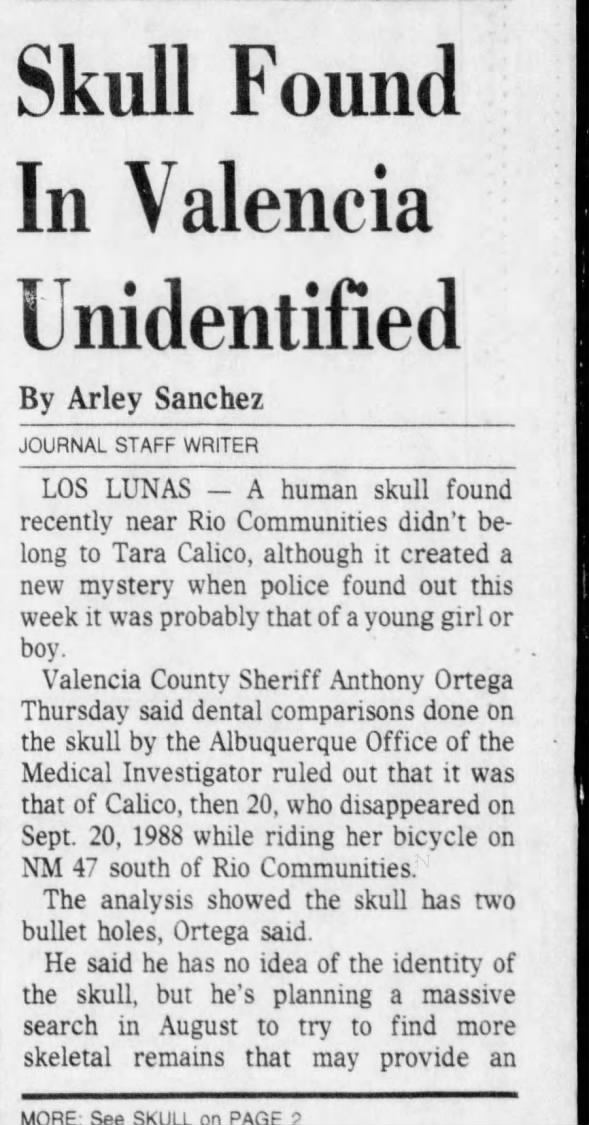 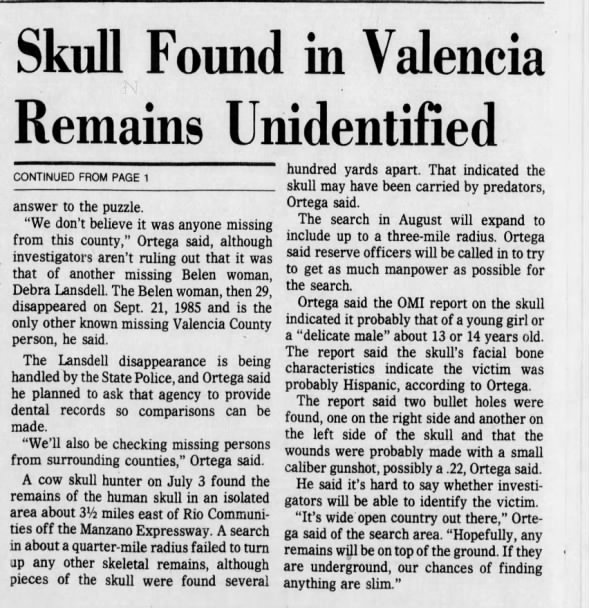 The final mention I could find of Debbie’s disappearance is a simple footnote in a November 3rd, 1996 spread on Tara Calico’s disappearance. Neither Debbie nor Tara’s remains have been found. 6 thoughts on “The Disappearance of Debra Lansdell”